Do you believe in ghosts? Not yet? After reading this blog I’m sure some of us start thinking about these 33 places with ghosts.

To visit any of them or get more details about these castles – just download our MobiCastle Apps (for Android or IOS).

So let’s take a look on the most mystic places of Great Britain.

Wales
Caerphilly Castle, nr Cardiff
A green lady flits from turret to turret so fearlessly that on one occasion some of the town boys almost caught her.
Ghostly soldiers also patrol the battlements.
Modern day security personnel will not venture up to the flag tower because they can smell perfume at all times.

Cardiff Castle, Cardiff
The second Marquess of Bute began restoration of Cardiff Castle but died in 1848. He is said to appear by walking through the fireplace of the library. He leaves this room by passing through a six-foot-thick wall into a corridor, then passes through the wall of the chapel into the room in which he died.
The main dining-hall of the castle is also disturbed. At precisely 3:45am heavy doors open and shut by themselves and the lights flash on and off.
A “faceless vision in a flowing grayish-white skirt” has also appeared in a stockroom close by, where things get disarranged.

Castell Coch, nr Cardiff
The young son of Dame Griffiths fell into a bottomless pool of dark water within the precincts and was never seen again. His mother was inconsolable and soon died from her grief. Her ghost restlessly continues to wander about the castle and its surrounding woods. 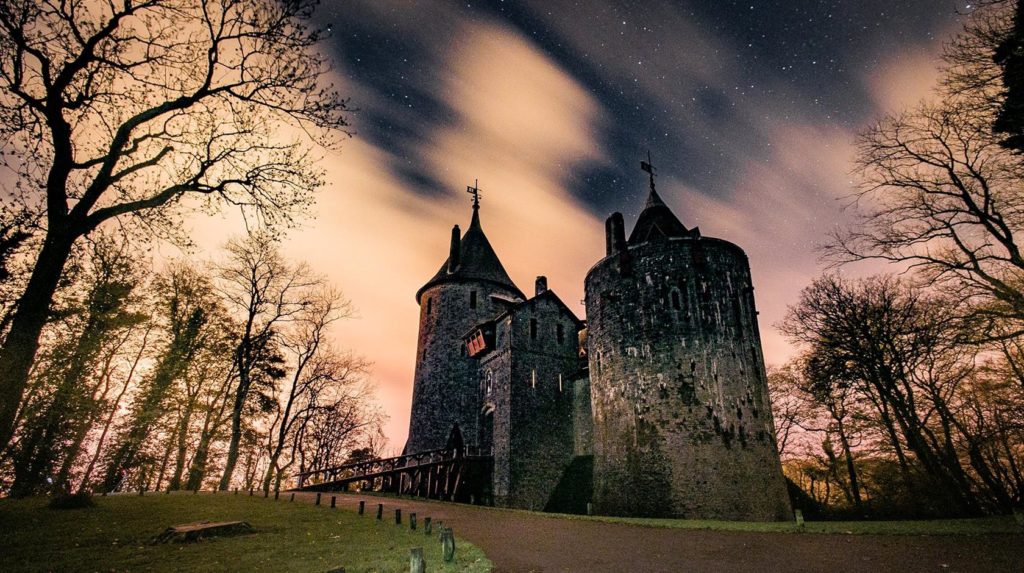 Conwy Castle, Conwy
One of Robert Wynn’s successors at Plas Mawr had to leave Conwy to fight in a distant war. When the time was near for his return, his wife and child climbed the steep stair to the lookout tower. He was late, and the wife and child had to leave the tower because of darkness. On the way down she slipped, and, along with her child, fell to the bottom of the tower. They were taken to the lantern room. Doctor Dic was summoned but stated he could do nothing to save them. Fearing the wrath of the lord upon his return, the servant locked Dr. Dic inside the lantern room with the dying family. Upon the Master’s return, the door was unlocked. He found the dead bodies of his wife and child, but not Dr. Dic. The Doctor was never seen again. The bereaved husband eventually went mad with grief and died soon after. His ghost still seeks the missing doctor in the lantern room and will continue to do so until he is found.

Dunraven Castle, Glamorgan
The castle was demolished after World War II. It was haunted by a little old lady in a blue dress who left behind her the smell of mimosa.

Roch Castle, Pembrokeshire
The ghost is the shade of Lucy Walters, first mistress of Charles II, who was born in 1630. She floats through locked rooms in a white dress and may be the cause of the noisy running footsteps which mysteriously disturb the sleep of guests on occasions.

Ruthin Castle, Denbighshire
There is a ghostly figure of a man in armor wearing only one gauntlet.
There is also a strange glowing ball of light.

The ghost of Lady Grey has been seen wandering the hallways of the castle.

Arundel Castle, Sussex
A ghost from King Charles II’s time browses books in the library. He is known as the “Blue Man”.

Berry Pomeroy Castle, Devon
Said to be haunted by the daughter of a wicked baron who, as a consequence of an enforced relationship with her father, bore him a child, which he strangled.

Bramber Castle, Sussex
William De Braose angered King John. He escaped to Ireland with his children, only to to captured. The king ordered that his children be held hostage for William’s future good behavior at Windsor Castle. The children were starved to death. Their ghosts returned to Bramber Castle and have been seen.

Cadbury Castle, Somerset
Ghostly horsemen carrying torches have been seen at the castle.

Corfe Castle, Dorset
The ghost of a headless woman has been seen next to the walls of the castle.

Dover Castle, Kent
Dover Castle is associated with numerous ghosts and strange sounds.
In the King’s bedroom, the lower half of a man has been seen walking through the doorway. The specter of a woman dressed in a red dress has been seen at the west stairway of the keep. The sounds of a creaking doorway opening and closing where a door used to be, but isn’t anymore, have been heard.

Featherstone Castle, Northumberland
The castle is associated with a ghostly bridal party. Baron Featherstonehaugh had arranged for his daughter to marry a relative of his choice, even though the daughter was in love with someone else. The wedding party left for the “traditional hunt” after the wedding, leaving the baron behind to make arrangements for the banquet. When the party failed to return by midnight, the baron began to fear the worst. Sitting alone at the table, he heard horses crossing the drawbridge. The door opened and the party entered. But, they made no sound and passed through furniture.
The wedding party had been ambushed and killed. On the anniversary of the wedding, the party can still be seen heading towards the castle. 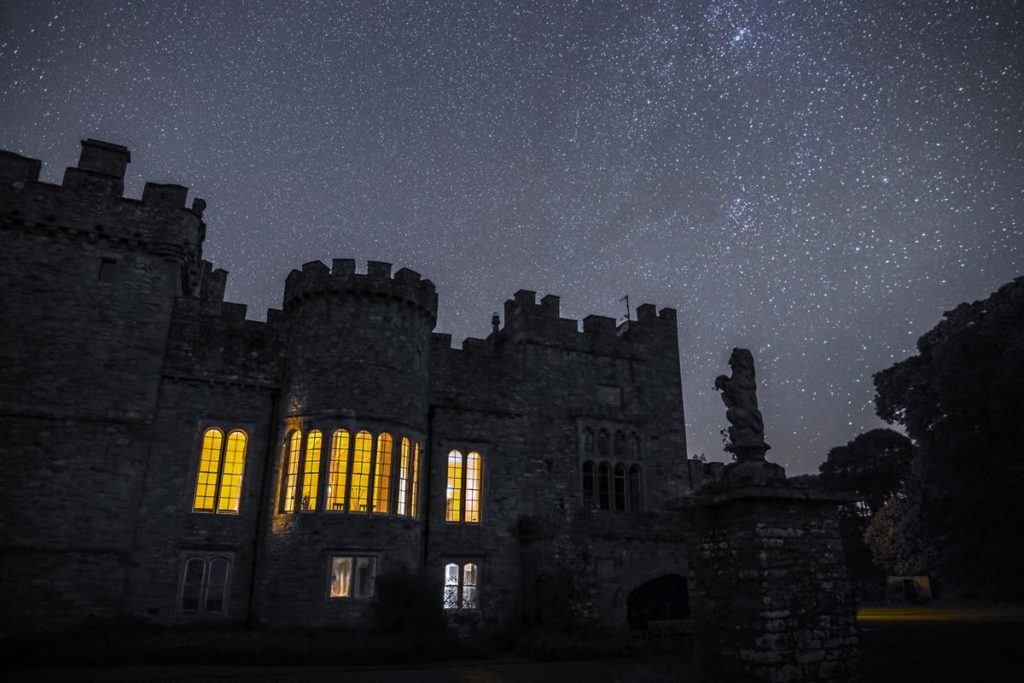 Herstmonceux Castle, Sussex
Many different ghosts have been seen here. The “White Lady,” the “Grey Lady” and a woman on a white donkey.

Hever Castle, Kent
The ghostly figure of Anne Boleyn has been seen gliding over the bridge.

Lowther Castle, Cumbria
Haunted by Sir James Lowther. He was very unhappy with a prearranged marriage, and fell in love with a farmer’s daughter. When she suddenly grew ill and died, Sir James refused to believe she was dead and left her on the bed. She was finally moved and placed in a coffin with a glass lid, which he set in a cupboard where he could look at her. She was finally buried, and Sir James died unloved and unmourned.
At his funeral his coffin began to sway as it was lowered into the ground. His spectral coach and ungroomed horses can be seen being driven through the parklands of the castle.

Okehampton Castle, Devon
A specter of a black dog can be seen at the castle.

Old Wardour Castle, Wiltshire
Lady Arundel’s ghost haunts the castle grounds. She was executed after a siege by the Roundheads.

Pengersick Castle, Cornwall
A specter of a man haunts the castle. He tried to poison his wife, but the wife poisoned him first.

Pevensey Castle, Sussex
Below the castle walls a spectral army can be seen and heard.

Scotney Castle, Kent
A dripping wet ghost haunts the castle. It is said that the man was a Revenue Officer murdered by smugglers.

Tower of London, London
In 1816, a guard saw what he described afterwards as “a shadowy bear walking up the stairs in the twilight.” He lunged at it with his bayonet, which shattered against the wall. The ghostly presence walked on unaffected and the guard, having told his unlikely story to others, died of shock a few days later.

Windsor Castle, Berkshire
Queen Elizabeth I’s ghost has been seen in the library.
A young guard shot and killed himself and another guard on duty saw him afterwards.

Aldourie Castle, Inverness & Nairn
The castle is said to be haunted by a Gray Lady.

Barcaldine Castle, Argyll & Dunbartonshire
Donald Campbell was murdered on the castle grounds, and his ghost has been seen at the castle. It is believed that he is wandering in search of his killer.

Dunrobin Castle, Sutherland & Caithness
The upper floor of the castle is said to be haunted by the daughter of the 14th Earl. She had been imprisoned in the attic by her father for her wrong doings. She tried to escape from a window, but fell to her death.

Duntrune Castle, Argyll & Dunbartonshire
Coll Macdonnell had a personal score to settle with the Campbells of Duntrune. As Coll approached the castle, a piper played a warning tune. Coll turned back. The Campbells cut off the piper’s hands. A handless skeleton was later found at the castle, and pipe music can still be heard in the castle.

Hermitage Castle, Borders
A neighboring chief sent a group of goodwill ambassadors to Hermitage to propose cessation of their long feud. The lord promptly put the men into a small room without food or water. All the men died and their ghosts still stalk the ruins.