The Legend of the White Lady and the Hohenzollern Castle 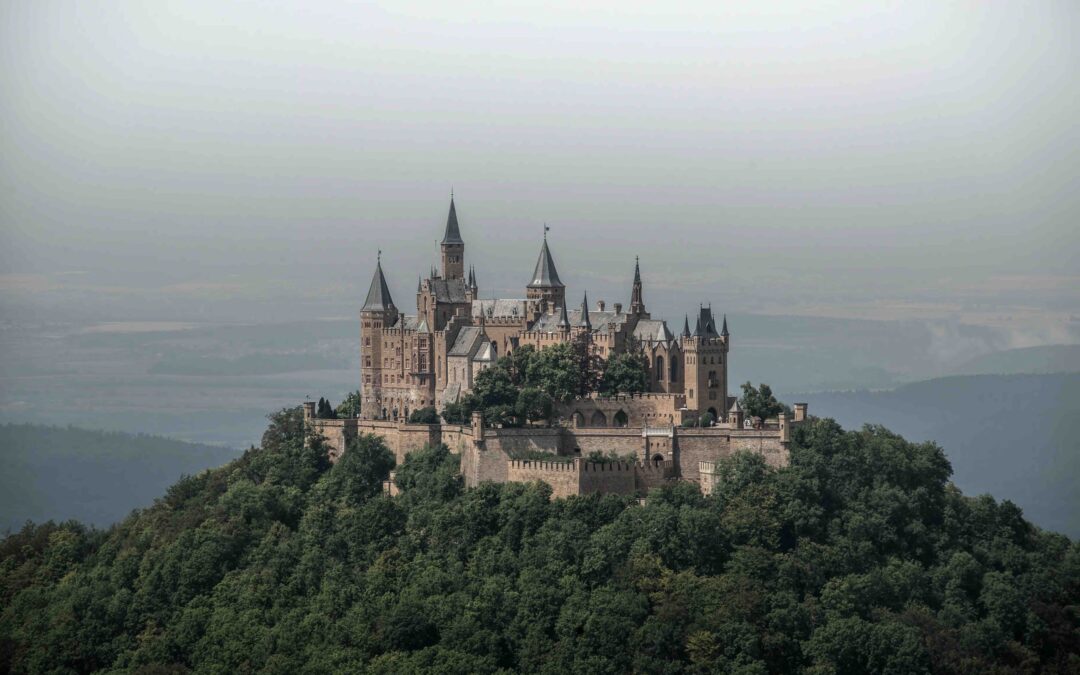 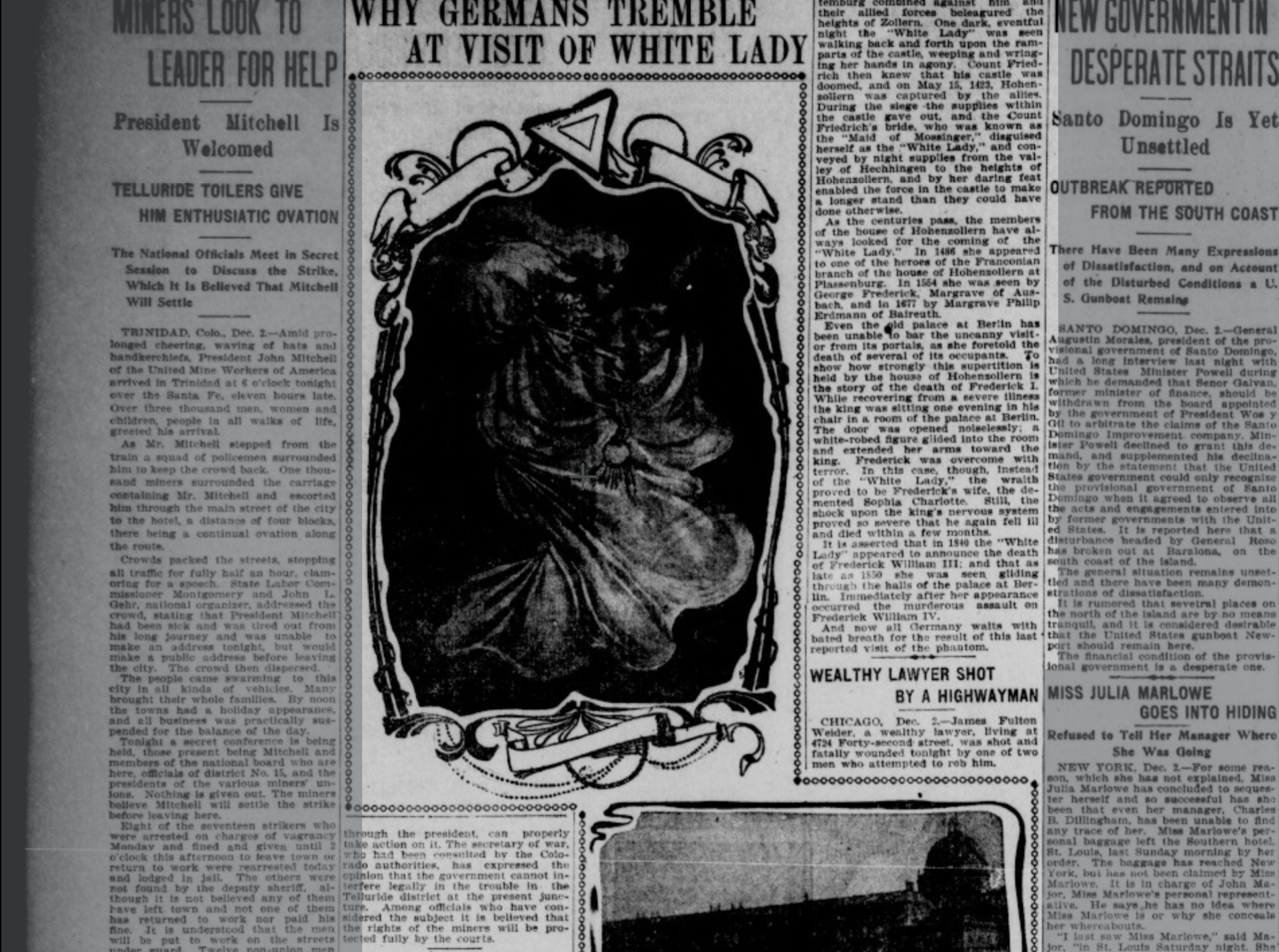 That millions of sedate and thor-ough-going Germans are worrying about the reported appearance of the “White Lady of the Hohenzollerns” is not surprising when the age and respectability of the legend is considered.

The legend of the “White Lady” has been traced back as far as the fourteenth or fifteenth century. She was then seen walking around on the ramparts of the castle of the Hohenzollerns on the heights of the Zollerberg. The “White Lady” is described by those who claim to have seen her as wearing a long white veil, with a cluster of roses upon her shoulder, and carrying in her hands a large bunch of keys. She, it was claimed, knew where the remains of the Nibelungen treasure were hidden. The “White Lady” has very often nearly betrayed her secret, as, according to German legends, she has been seen to Knock upon the side of the mountain and at her touch a mysterious door would open, and through the aperture flashes of gold and jewels danced. One legend fixes the White Lady as the wraith of the Countess Kunlzunde of Orlamunde, a young widow who fell in love with Albrecht of Zollern and Nuremberg. Her love was not reciprocated, the young burgrave telling her that he “could not marry her, since there were four eyes In the way.” The countess, thinking the “four eyes” meant two sons by her former marriage, and maddened by the thought of them as being the only obstacle to the fulfilment of her wedding, killed both of the boys by stabbing them In the head with a spindle. The “four eyes” | that Albrecht meant, however, were his brothers, but If he had really desired to marry the countess it Is doubtful whether he would have considered their views In the matter. After this terrible crime committed by the countess, he turned from her in horror and disgust. The countess subsequently died, overcome with shame and remorse, and forever afterwards haunted the castle of Albrecht. As Albrecht died in 1361 this tragedy must have occurred in the early part of the fourteenth century, and the weird, grewsome [sic] tales of Kunigunde have been told from generation to generation, (riving to the castle of Hohenzollern and the ancestral seat of the counts of Orlamunde a fascinating Interest. In the early part of the fifteenth century there dwelt in the Hohenzollern castle a powerful count named Fredrich the Oettinger. He was jealous of the increasing power of the free cities of the empire, and they were made to feel the force of his iron hand. The cities of Wurtemburg combined against him and their allied forces beleaguered the heights of Zollern. One dark, eventful night the “White Lady” was seen walking back and forth upon the ramparts of the castle, weeping and wringing her hands in agony. Count Friedrich then knew that his castle was doomed, and on May 15, 1423, Hohenzollern was captured by the allies. During the siege, the supplies within the castle gave out, and the Count Friedrich’s bride, who was known as the “Maid of Mossinger,” disguised herself as the “White Lady,” and conveyed by night supplies from the valley of Hechhingen [sic] to the heights of Hohenzollern, and by her daring feat enabled the force in the castle to make a longer stand than they could have done otherwise.

As the centuries pass, the members of the house of Hohenzollern have always looked for the coming of the “White Lady.” In 1486 she appeared to one of the heroes of the Franconian branch of the house of Hohenzollern at Plassenburg. In 1564 she was seen by George Frederick, Margrave of Ausbach, and in 1877 by Margrave Philip Erdmann of Bayreuth. Even the old palace at Berlin has been unable to bar the uncanny visitor from its portals, as she foretold the death of several of its occupants. To show how strongly this supertition [sic] is held by the house of Hohenzollern Is the story of the death of Frederick I. While recovering from a severe illness the king was sitting one evening in his chair in a room of the palace at Berlin. The door was opened noiselessly; a white-robed figure glided into the room and extended her arms toward the king. Frederick was overcome with terror. In this case, though, instead of the “White Lady,” the wraith proved to be Frederick’s wife, the demented Sophia Charlotte. Still, the shock upon the king’s nervous system proved so severe that he again fell ill and died within a few months. It is asserted that in 1840 the “White Lady” appeared to announce the death I of Frederick William III; and that as late as 1850 she was seen gliding through the halls of the palace at Berlin. Immediately after her appearance occurred the murderous assault on Frederick William IV. And now all Germany waits with bated breath for the result of this last reported visit of the phantom. 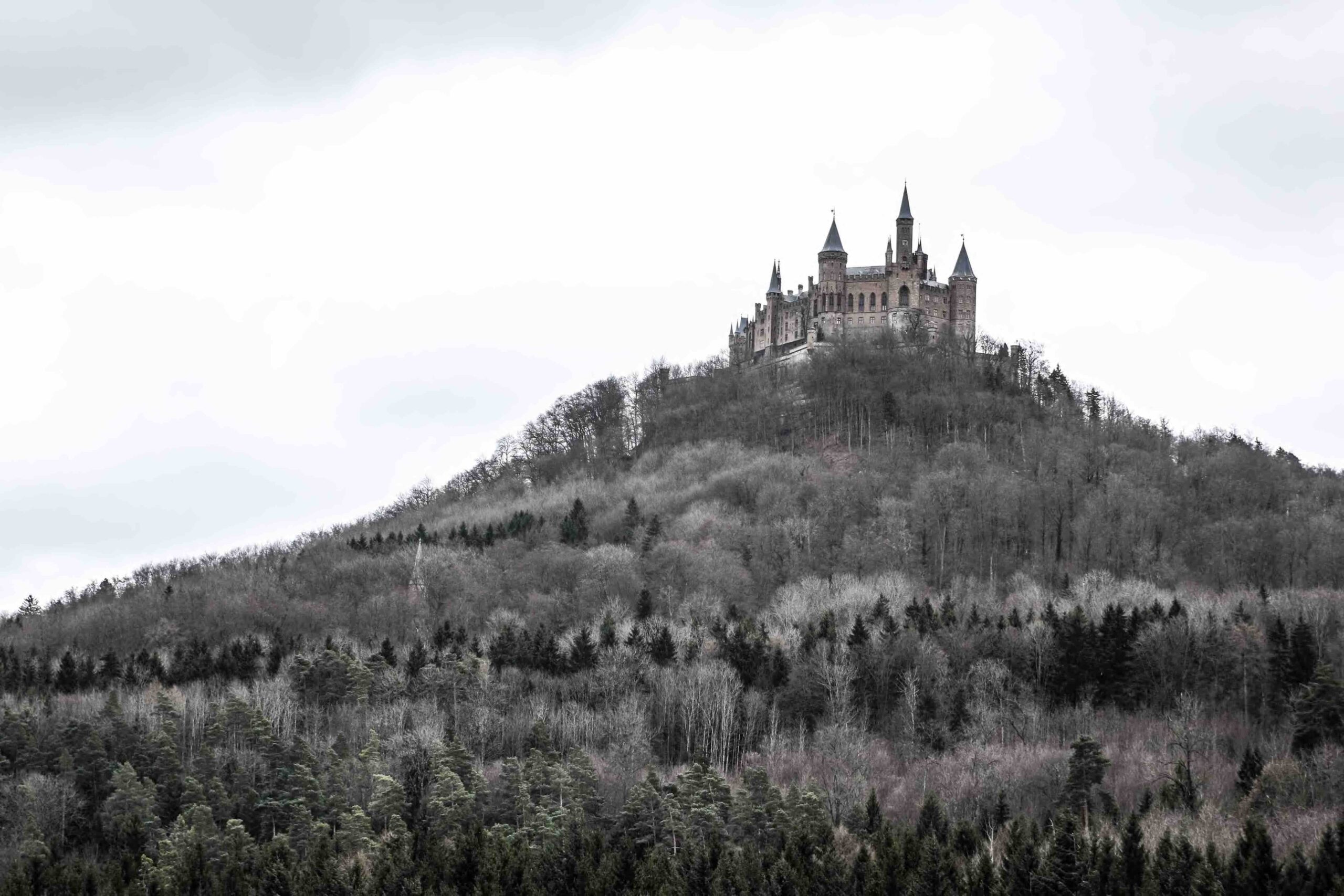