Ksiaz Castle in Poland. Nazi secrets, a ghost of the princess and hidden treasure legend.

If you are fascinated by the secrets, treasures and ghosts of World War II, then Ksiaz Castle is the place for you. 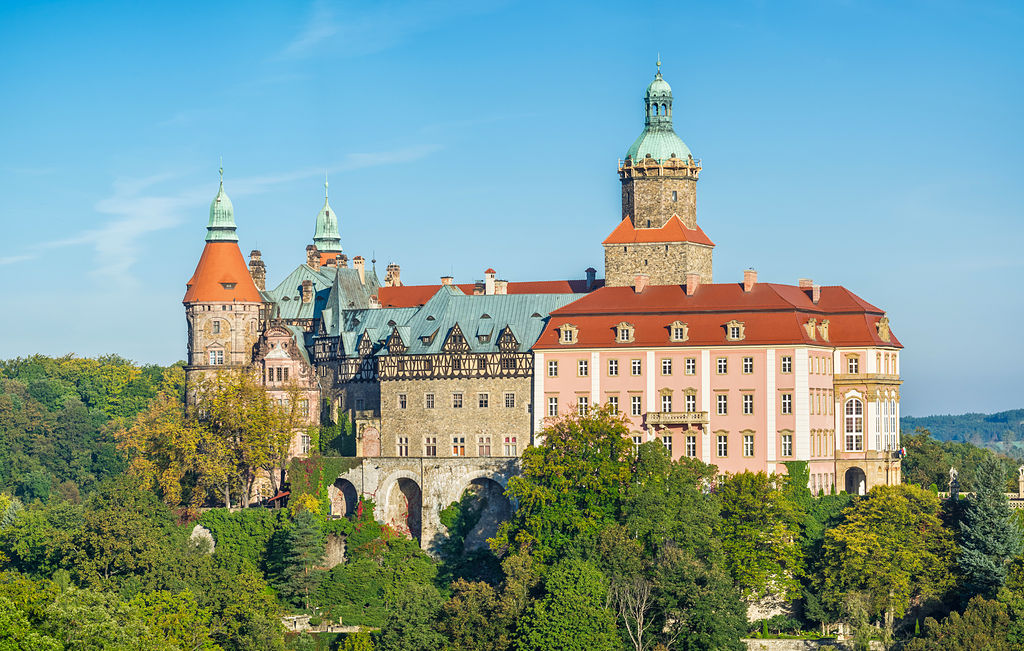 An impressive site, it is located on a wooded hill in the city of Walbrzych, in southwestern Poland. The area attracted worldwide attention recently, when two explorers announced that they had located a secret tunnel that hides an armored war train with a precious cargo. The news revived local legend of a train laden with gold and valuables that the Nazis reportedly hid from the Red Army in the mountains in 1945.

Authorities are taking steps to verify the explorers’ claim, but Walbrzych’s former coal mining center (known as Waldenburg in its German era) and the castle are already the richest for tourists and reporters whose numbers skyrocketed after the news of the supposed find broken

Even without the train and gold, visitors will enjoy the beauty of the Owl Mountains in the Sudeten Mountains, the rich and dramatic history of the area, and a visit to the magnificent Ksiaz Castle. The castle was seized by the Nazis in 1941 as Hitler’s future residence. Many of the historic interiors were torn down in an ill-conceived impulse for modesty. The Nazis then began to build a bunker about 50 meters below the castle to protect Hitler from Allied bombs.

Finally, a maze of tunnels and bunkers was built using forced labor from the nearby Gross-Rosen concentration camp, but the complex was not completed at the end of the war, and its true purpose remains a mystery 70 years after the war. Some historians say the complex would become the headquarters of the Nazi command, others believe that the tunnels should have housed an arms factory or a nuclear weapons laboratory. Tourists can visit some of the tall, wet tunnels, but many remain unexplored. The legend of a hidden gold train first came to light by a retired coal miner, Tadeusz Slowikowski, in the 1970s, but the mysteries surrounding the complex have kept him alive.

The huge gray and pink castle unites many architectural styles, dating back to the 13th century and Slavic rulers. It passed into Austrian and then Prussian hands and was known as Schloss Furstenstein, as it expanded repeatedly, the last time in the early 1900s. It was privately owned by the aristocratic Hochberg family from the early 16th century until the Nazis took it to punish the Hochbergs who did not support Hitler. When borders changed after World War II, this region of Lower Silesia became part of Poland.

The last owner of the castle, evicted by the Nazis, was Mary Theresa Olivia Cornwallis-West, born in Wales, first wife of Prince Hans Heinrich XV. Carrying the title of Princess of Pless, but popularly known as Daisy, she was a great beauty, a sociable and related by marriage to Winston Churchill. Her brother George was Churchill’s mother’s second husband, Jennie. The princess died in 1943 and was buried in the Hochberg mausoleum near the castle, but her servants moved the body several times to protect the tomb from looting by Soviet troops, who occupied the area from May 1945 to the end of 1946.

As a result, Princess Daisy’s resting place remains unknown. It is another mystery of the castle with its own legend: that its spirit revisits.

Box office open Monday through Friday from 10 a.m. at 3 p.m. Saturday to Sunday from 10 a.m. at 4 p.m. Variety of tours available. Accommodation on castle grounds: Hotel Ksiaz or Hotel Przy Oslej Bramie, with restaurants and cafeteria. There are also hotels and restaurants in the city of Walbrzych, where the castle is located. Walbrzych can be reached by train, bus or car from Wroclaw, about 70 kilometers away, where there is an airport. Walbrzych is located about 350 kilometers (220 miles) from Berlin and 450 kilometers from Warsaw.

Download our application to find more information about this castle.